All Collections
Explain project information to your community
Create your own custom widget
Bluehaven | Tracking users with Facebook Pixels.

Learn how to include pixels in your project or site for tracking.

Advanced marketers may want to include Facebook Pixels in their project pages to track the success of their Facebook ad campaign. You can do this on a project by project basis, as described below, or for your entire site by pasting your Pixel code into the custom tracking field in your site settings. In either case, if your Pixel is included but does not fire, get in touch with us.

NOTE: This is advanced. Only proceed if you feel confident you understand this. If not, please ask us!

Here is how to include the pixel in any EHQ project page:

Go into the project where you want to place the pixel and set up a custom widget. 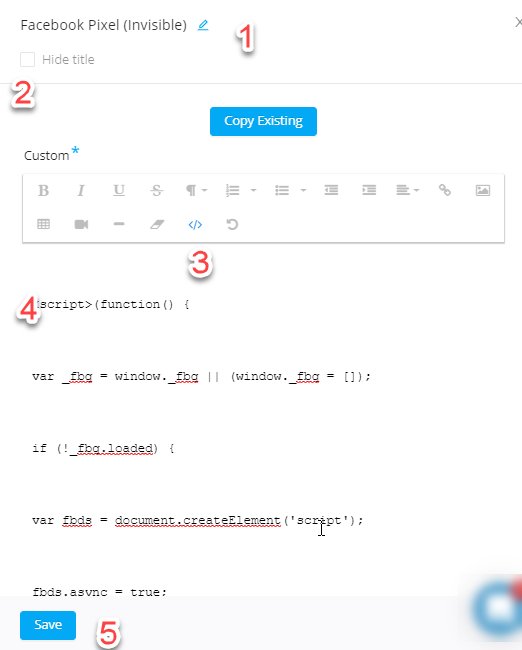 In the sixth step, move the widget to the top of your widget order. This widget is active, but shouldn't show on the page because you have hidden the title and there is no visible content. However, the code will still be executed.

If you need to adjust the code, you will have to go through steps 3-5 again. You can NOT edit existing code!

The Facebook Pixel code will look similar to this:

The data collected by the Facebook pixel which has been embedded will only be available on Facebook and not in the EHQ reporting.