Understand the logic of the 'Ranking' question type in reports

How the 'Ranking' question type in surveys & forms should be interpreted in the reports.

Written by Nathan Connors
Updated over a week ago

EngagementHQ's Surveys & Forms tool provides a question type called 'Ranking'. This type allows you to ask survey-takers to rank specific options or statements based on their preference. There are a few things you should note:

The formula used to calculate the ranking averages is "Option_rank = total rank/number of votes". The Total rank is the addition of all the ranks received to an option and Votes are the number of times that rank was selected.

As a way of example, consider the question:
What is your favorite mode of transport? (Rank by most(1) to least(4) preferred) 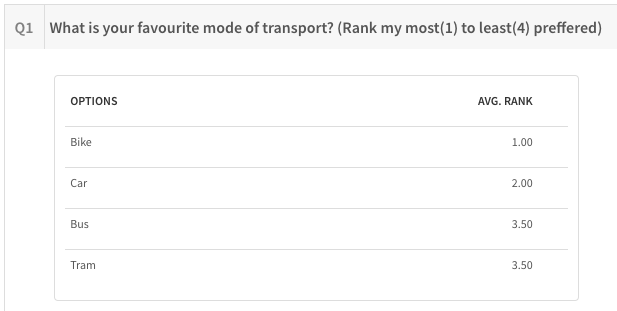 In this case, the Bike is ranked on average as the most preferred mode of transport. With an average ranking, the lower the number, the more preferred the option. Hence ensure that the question and the ranking scale are clearly described when soliciting input from the participants.

Another example of the logic behind the ranking question is as below;

A survey has a question with three options and five people voting on it. Option one is being ranked by those five people as

Contact our support team if you need any further assistance via chat or email support@engagementhq.com.