The Ideas Tool now allows participants to comment on other participant's ideas in addition to voting for Ideas they like. Participant's can also add pictures when they contribute ideas.

These new settings are now available on the Idea's Tool as shown in the illustration below. The option boxes, highlighted, Allow image upload and Allow comments should be ticked to allow participants to add an image to their idea and allow commenting on Idea's posted.

When image upload is allowed, the participants will see an option to 'Upload Image' when they add an idea, as shown below.

When the allow comments option has been selected, the participants will see an option to 'Post' a comment for an idea, as shown below.

Note :  When a comment is added to an idea, the idea contributor will get an email notification on this.

The comments captured against an idea will be displayed in the idea preview as shown below. 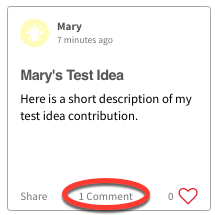 Once a comment is posted, the participant has the option to edit as well. Open the idea and click on the dots in the right corner to view the options.

On click, the option to edit, delete and report can be seen.